This was a giant space that is hard to think of it as being underground.

It is the stronghold of the Satanists and it is also the place where the higher-ups gather. In this place, there’s currently a meeting about the attack a few days ago.

“Walking, you even had Hell with you, and yet you ended up like this?”

“Even though you are good at commanding, looks like your cowardice is still not coming out as always.”

The talk was, as usual, criticism towards Walking.

But he didn’t talk back and was silently enduring it. No matter who was at that place, it would be clear that he had lost after all.

“That Dragonewt held abnormal levels of power. That’s all there’s to it.” (Walking)

The words that were said as if they were a parting threat made the bunch noisier. However, the moment the person at the seat located the highest raised his hand…the room went silent.

“Rather than that man, I am more interested in the rumor that the ‘Demon Lord’ has appeared.” (Utopia)

No one could answer that.

The descent of the Demon Lord was their longstanding desire, but from the people that went to the Shrine of Wishes, none returned. It would be natural to assume that they failed.

There were already rumors going around of someone calling himself the Demon Lord, but no matter how you looked at him, he was a human male. He had a somewhat ghastly face, but calling him someone from the demon race would be a stretch.

“The Devil King revived, but…it was killed by the Demon Lord; there’s rumors like that too.” (Utopia)

The next words of Utopia made everyone make bitter expressions. The Demon Lord that they arduously desired to appear killed the Devil King; it was too much of an unreasonable story.

“No matter the case, there’s the need for more sacrifices and power for Hell.” (Utopia)

That was an order to bring further chaos and bloodshed.

Everyone heard this and nodded deeply. For them, the illness eating away this country was already at a stage where it cannot be cured.

Then, there’s no choice but to turn all into ashes and start from the ground up, is how they must think.

“—Destroy the Holy Capital, and throw in all gems and stones into the depths of Hell.” (Utopia)

The words that came out from Utopia were a declaration of destruction.

The higher-ups hurriedly stood up from their seats and left the room in order to make the necessary preparations. The only one remaining in the room was Utopia.

“That fool Greol; what pebble did he stumble on.” (Utopia)

In this room with no one but him, Utopia muttered that.

When talking about the bar where the most adventurers gather in, it would be this one.

Without caring about what rank of an adventurer they are, they had a habit of gathering from early in the day to this favoured establishment of theirs.

This bar is one that has been taking care of them since it was still in its early stages, and there’s many who have a strong attachment to it.

In that sense, there’s many who have been aided by this place, and there’s quite a lot of people who continued going there even when they were promoted.

It was originally a small bar, but with repeated expansions over the time, it has now grown into one of the biggest establishments in the Holy Capital and one of its selling points.

You could say it is a rare case of a store growing together with its customers.

Mikan was spitting out to the female bar owner what could only be heard as complaints. In Mikan’s hand there’s cold ale, and it looks like she was quite drunk.

Looks like she can’t forget the Demon Lord that she met just a few days ago.

The female owner who heard this responds heartily.

Her name is Yay.

A well-build 50 year old woman with looks that are fitting to be called Mom. Because she is incredibly good at looking after others, there’s an incredible amount of adventurers that love her.

“…He was a dandy Oji-sama. I want him to fill the hole in my heart and my butt.” (Yukikaze)

“Nahaha! Yukikaze-chan is the same as always, huh. For men, once you grab them by the balls, they are yours.” (Yay)

Yukikaze said something outrageous while drinking milk, but Yay let out an energetic laugh hearing this.

They are like this even when sober, so it is scary to even imagine what would they be like when drunk.

Mikan, who could be said to be the only reasonable person within this group, shouts with red face as if unable to endure it.

“Yukikaze, that was the Demon Lord, you know? You, are you taking that into account when speaking?! In the first place, you are a man!” (Mikan)

“…Mikan, you are ignorant. A wo-man can properly get pregnant.” (Yukikaze)

“Is that milk alcoholic or something?!” (Mikan)

The men in the bar were listening to that conversation and their faces were distorting.

The idol they love to their utmost, ‘Yukikaze-tama’, had her heart stolen by someone. They couldn’t feel calm knowing this.

“What’s that about ‘Demon Lord’! There’s no doubt he is just a crazy delusional guy!”

“I would rather have Yukikaze make me pregnant-de gozaru.”

“You fool! Keep the sleep-talk for when you are sleeping!”

Within those, there’s even some who would wear cloaks that have a drawing of her on it.

Looks like, no matter the world, fans act the same way.

“In the first place, there were close to 300 Sand Wolves, you know…? And he was able to burn them all to death in an instant! That’s unbelievable! That can only be called a calamity!” (Mikan)

“…Mikan, have you forgotten that our lives were saved by Oji-sama?” (Yukikaze)

“…A debt has to be returned with your body.” (Yukikaze)

“You do that yourself!” (Mikan)

Today as well in Glug Glug, the noisiness continued without end.

But within those people, there was one man who had a sword on his lap and wasn’t talking with anyone, gulping down many strong wines one after the other.

In this country, there’s a long-living swordsman, the Sword Saint Albedo.

With a single sword in hand, he is a master swordsman that cuts down everything in his path.

“Kaka, a man calling himself the Demon Lord, huh… Looks like there’s a nice opportunity to get an achievement.”

Cutting down the rumored person—just how much fame and money would rain down on him for that.

Imagining this, he made a bold smile.

This is not a bar for adventurers, but rather, a super high-class establishment that’s preferred by nobles.

The inside of the establishment was filled with what could be called a peaceful atmosphere, and it was far from being a noisy environment.

At a corner of the store, there’s two women silently eating.

In this place where the surroundings were all nobles, these two girls that were wearing adventurer attires were sticking out, but there’s no one complaining about this.

It is because they are world renowned adventurers; the ones that would be classified as S Rank, existences that are called Star Players.

Their topic of conversation was not the Demon Lord, but the Dragonewt.

“Organ, do you really think that’s a Dragonewt?”

The woman says this while putting a spoonful of stew in her mouth.

The clothes that woman is wearing were overflowing with holy power and could be said to be the prime example of a priest. A low rank Devil would find it hard to even approach her.

But what stands out the most is her chest.

It is so big that it felt as if it would burst out from her clothes, and from the perspective of someone else, it looked painful.

The name of the woman is Mink.

She is one of the Star Players, and her beautiful countenance and big breasts would naturally draw the eyes of men.

The woman called Organ responds while moving the salad into her mouth.

It looks like the salad didn’t have any sort of dressing. She was eating it just as it is.

Her body is small like that of a child, and her whole body is covered in a black robe, so her appearance cannot be seen.

However, the sight of her small mouth munching on the salad was cute.

She is an incredibly rare mixed race, a *Cambion*. <Offspring of a demon and human.>

Depending on the country, they might become a target of subjugation, so they would normally hide their identities, and constantly change the place where they live.

The Holy Light Kingdom obviously doesn’t allow the existence of demons, and she is simply staying here in the middle of her travel.

Currently, in the whole world, there’s only Mink who knows that she is a Cambion. Because she has…killed everyone who learned about it.

“But that’s a dream-like story, don’t you think? A Dragonewt that hates evil.” (Mink)

“If he really does exist, there’s no way the beastkin nation would leave it be.” (Organ)

“Would it be called a wild Dragonewt?” (Mink)

“How stupid. If he really is out there, I would like to see him with my own eyes.” (Organ)

In the eyes of Organ, this is unreasonable, and it pissed her off.

“I have heard rumors that the Demon Lord has also appeared. My darkness is also telling me the same.” (Mink) 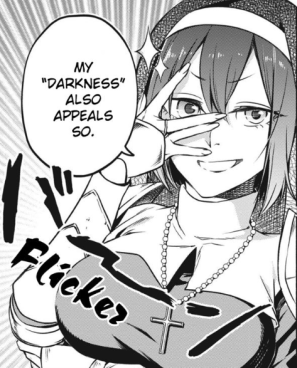 “This itch in my right eye…there’s no doubt. The Demon Lord that will bring the world to chaos has descended, and we will be the darkness that strikes him down.” (Mink)

“What are you saying…” (Organ)

There’s probably a rule where, no matter the team, one of them has to be a weirdo.

Without knowing the happenings around the adventurers, Maou was approaching the Holy Capital.

At that same time, the Satanists were beginning to act.

It looks like there’s already no way to avoid the mayhem that will happen in a near future.